Thick-film resistors are often overcoated with a glaze material (typically a borosilicate glass) to protect them against the environment, chemical attack, and mechanical abrasion.

Thin film resistors are created using a technique called sputtering which permits a very thin and controlled layer of a material, tantalumnitride or Nichrome, to be deposited onto a substrate. The environment in which the film is laid and without the necessity for high power laser trimming ensures a very stable and accurate resistor.

Thick film resistors are constructed from a resistive paste which is printed onto an insulating substrate and then fired. The paste includes glass particles that when fired help fix the resistive material in place; however, it also causes random imperfections within the printed material that can change the conductive properties of the resistor. Thick film resistors are also laser trimmed, as the conductive paste does not have an accurate ohmic property, to achieve the correct resistance value. Laser trimming can have the undesired effect of causing microfractures in the fired paste which cause imperfections in the conductance properties of the resistor. 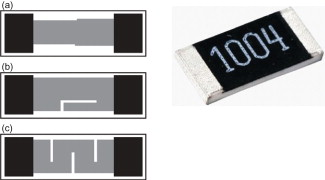 Applications
Power ratings of film resistors are based on continuous direct-current operation or on root-mean-square operation. Power derating is necessary for operation at ambient temperatures above the rated temperature. In pulse applications, the power dissipated during each pulse and the pulse duration are more significant than average power conditions. Short high-power pulses may cause instantaneous local heating sufficient to alter or destroy the film. Excessive peak voltages may result in flashover between turns of the film element. Derating under these conditions must be determined experimentally.

Film resistors are fairly stable up to about 10 megahertz. Because of the extremely thin resistive film, skin effect is small. At frequencies above 10 megahertz, it is advisable to use only unspiraled units if inductive effects are to be minimized (these are available in low resistance values only).

Under extreme exposure, deposited-carbon resistors deteriorate rapidly unless the element is protected. Encapsulated or hermetically sealed units are preferred for such applications. Open-circuiting in storage as the result of corrosion under the end caps has been reported in all types of film resistors. Silver-plated caps and core ends effectively overcome this problem.