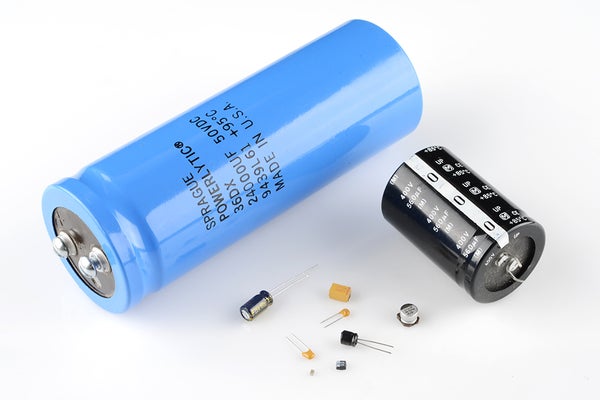 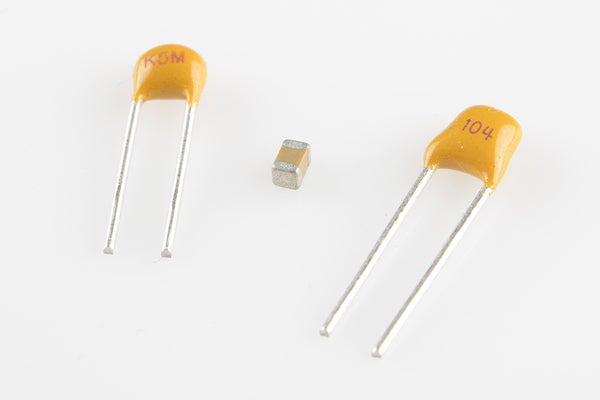 A capacitor is a bit like a battery, but it has a different job to do. A battery uses chemicals to store electrical energy and release it very slowly through a circuit; sometimes (in the case of a quartz watch) it can take several years. A capacitor generally releases its energy much more rapidly—often in seconds or less. If you're taking a flash photograph, for example, you need your camera to produce a huge burst of light in a fraction of a second. A capacitor attached to the flash gun charges up for a few seconds using energy from your camera's batteries. (It takes time to charge a capacitor and that's why you typically have to wait a little while.) Once the capacitor is fully charged, it can release all that energy in an instant through the xenon flash bulb. Zap!

There are many different kinds of capacitors available from very small capacitor beads used in resonance circuits to large power factor correction capacitors, but they all do the same thing, they store charge. In its basic form, a Capacitor consists of two or more parallel conductive (metal) plates which are not connected or touching each other, but are electrically separated either by air or by some form of a good insulating material such as waxed paper, mica, ceramic, plastic or some form of a liquid gel as used in electrolytic capacitors. The insulating layer between a capacitors plates is commonly called the Dielectric. A Typical Capacitor

Due to this insulating layer, DC current can not flow through the capacitor as it blocks it allowing instead a voltage to be present across the plates in the form of an electrical charge.

The amount of electrical energy a capacitor can store is called its capacitance. The capacitance of a capacitor is a bit like the size of a bucket: the bigger the bucket, the more water it can store; the bigger the capacitance, the more electricity a capacitor can store. There are three ways to increase the capacitance of a capacitor. One is to increase the size of the plates. Another is to move the plates closer together. The third way is to make the dielectric as good an insulator as possible. Capacitors use dielectrics made from all sorts of materials. In transistor radios, the tuning is carried out by a largevariable capacitor that has nothing but air between its plates. In most electronic circuits, the capacitors are sealed components with dielectrics made of ceramics such as mica and glass, paper soaked in oil, or plastics such as mylar.

There are many different types of capacitors and they each vary in their characteristics and each have their own advantages and disadvantages.

Based on the design, capacitors are categorized in these different types:
Electrolytic type:

For most of applications we use Electrolytic type Capacitors. They are very important for an electronic student as they are easy to get and to use, and they are inexpensive too.

Electrolytic Capacitors are generally used when very large capacitance values are required typically above 1μF. Here instead of using a very thin metallic film layer for one of the electrodes, a semi-liquid electrolyte solution in the form of a jelly or paste is used which serves as the second electrode (usually the cathode).

The dielectric is a very thin layer of oxide which is grown electro-chemically in production with the thickness of the film being less than ten microns. This insulating layer is so thin that it is possible to make capacitors with a large value of capacitance for a small physical size as the distance between the plates, d is very small.

An electrolytic capacitor is usually labeled with these things:
1. Capacitance value.

For an electrolytic capacitor, the capacitance is measured in micro Farad. Based on requirement the appropriate capacitor is chosen. With higher capacitance, the size of capacitor also increases.

Tantalum Capacitors are capacitors that are made of tantalum pentoxide. Tantalum capacitors, just like aluminum, are electrolytic capacitors, which means they are polarized. Their main advantages (especially over aluminum capacitors) is that they are smaller, lighter, and more stable. They have lower leakage rates and less inductance between leads. However, their disadvantags are they have a lower maximum capacitance storage and lower maximum working voltage. They are also more prone to damage from high current spikes. For the last reason, tantalum capacitors are used mostly in analog signal systems that lack high current-spike noise.

If you need Capacitors﻿, have a look at these products: