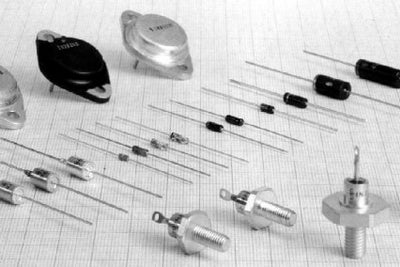 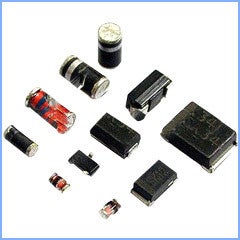 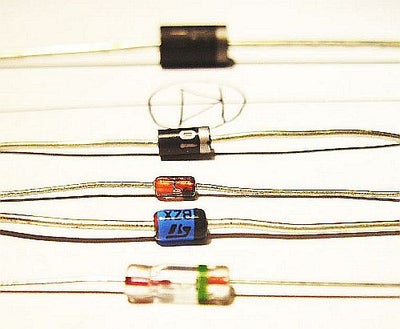 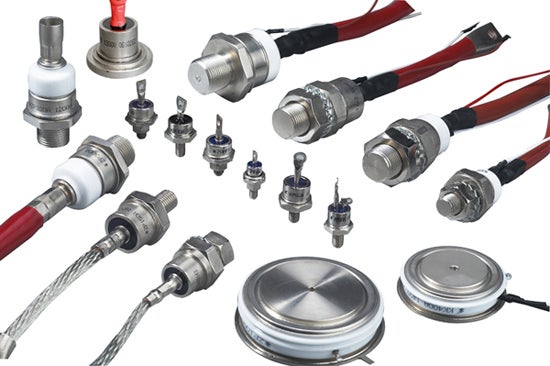 A diode is a specialized electronic component with two electrodes called the anode and the cathode. Most diodes are made with semiconductor materials such as silicon, germanium, or selenium. Diodes can be used as rectifiers, signal limiters, voltage regulators, switches, signal modulators, signal mixers, signal demodulators, and oscillators.

The fundamental property of a diode is its tendency to conduct electric current in only one direction. When the cathode is negatively charged relative to the anode at a voltage greater than a certain minimum called forward breakover, then current flows through the diode. If the cathode is positive with respect to the anode, is at the same voltage as the anode, or is negative by an amount less than the forward breakover voltage, then the diode does not conduct current. This is a simplistic view, but is true for diodes operating as rectifiers, switches, and limiters. The forward breakover voltage is approximately six tenths of a volt (0.6 V) for silicon devices, 0.3 V for germanium devices, and 1 V for selenium devices.

Many different types of diodes today are in use in electronics. The different kinds each have their own specialized uses. I will only discuss about more common types.

A small signal diode is a small non-linear semiconductor which is often used in electronic circuits where high frequencies or small currents are involved in television, radio and digital logic circuits. Small signal diodes are smaller in size compared to regular power diodes. They usually have a medium-high forward voltage drop and a low maximum current rating. A common example of a signal diode is the1N4148. Very general purpose, it’s got a typical forward voltage drop of 0.72V and a 300mA maximum forward current rating.

These diodes feature lower forward voltage drop as compared to the ordinary silicon PN junction diodes. The voltage drop may be somewhere between 0.15 and 0.4 volts at low currents, as compared to the 0.6 volts for a silicon diode. In order to achieve this performance, these diodes are constructed differently from normal diodes, with metal to semiconductor contact. Schottky diodes are used in RF applications, rectifier applications and clamping diodes.

Zener diodes are the weird outcast of the diode family. They’re usually used to intentionally conduct reverse current. Zener’s are designed to have a very precise breakdown voltage, called the zener breakdown or zener voltage. When enough current runs in reverse through the zener, the voltage drop across it will hold steady at the breakdown voltage. Taking advantage of their breakdown property, Zener diodes are often used to create a known reference voltage at exactly their Zener voltage. They can be used as a voltage regulator for small loads, but they’re not really made to regulate voltage to circuits that will pull significant amounts of current.

Like normal diodes, LEDs only allow current through one direction. They also have a forward voltage rating, which is the voltage required for them to light up. The VF rating of an LED is usually larger than that of a normal diode (1.2~3V), and it depends on the color the LED emits. For example, the rated forward voltage of a Super Bright Blue LED is around 3.3V, while that of the equal size Super Bright Red LED is only 2.2V. I will discuss about LEDs more detail later.

Photodiodes are used to detect light and feature wide, transparent junctions. Generally, these diodes operate in reverse bias, wherein even small amounts of current flow, resulting from the light, can be detected with ease. Photodiodes can also be used to generate electricity, used as solar cells and even in photometry.

This type of diode is different from the LED type, as it produces coherent light. These diodes find their application in DVD and CD drives, laser pointers, etc. Laser diodes are more expensive than LEDs. However, they are cheaper than other forms of laser generators. Moreover, these laser diodes have limited life.

If you need Diodes, you can have a look at these products: