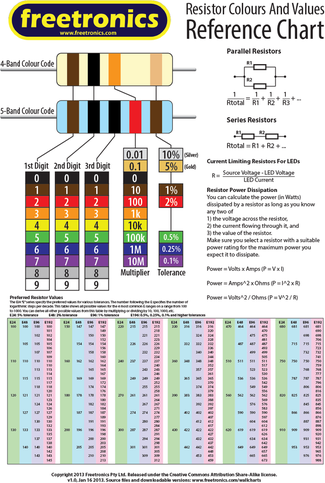 We know many different types of Resistor available and that they can be used in both electrical and electronic circuits to control the flow of current or to produce a voltage in many different ways. But in order to do this the actual resistor needs to have some form of “resistive” or “resistance” value. Resistors are available in a range of different resistance values from fractions of an Ohm ( Ω ) to millions of Ohms.

The resistance value, tolerance, and wattage rating are generally printed onto the body of the resistor as numbers or letters when the resistors body is big enough to read the print, such as large power resistors. But when the resistor is small such as a 1/4W carbon or film type, these specifications must be shown in some other manner as the print would be too small to read.

The reading direction might not always be clear. Sometimes the increased space between band 3 and 4 give away the reading direction. Also, the first band is usually the closest to a lead. A gold or silver band (the tolerance) is always the last band.It is a good practice to check the manufacturer’s documentation to be sure about the used coding system. Even better is to measure the resistance with a multi-meter. In some cases this might even be the only way to figure out the resistance; for example when the color bands are burnt off.

Surface Mount Resistors or SMD Resistors, are very small rectangular shaped metal oxide film resistors designed to be soldered directly onto the surface, hence their name, of a circuit board. Surface mount resistors generally have a ceramic substrate body onto which is deposited a thick layer of metal oxide resistance. The resistive value of the resistor is controlled by increasing the desired thickness, length or type of deposited film being used and highly accurate low tolerance resistors, down to 0.1% can be produced. They also have metal terminals or caps at either end of the body which allows them to be soldered directly onto printed circuit boards. Surface Mount Resistors are printed with either a 3 or 4-digit numerical code which is similar to that used on the more common axial type resistors to denote their resistive value. Standard SMD resistors are marked with a three-digit code, in which the first two digits represent the first two numbers of the resistance value with the third digit being the multiplier, either x1, x10, x100 etc. For example: