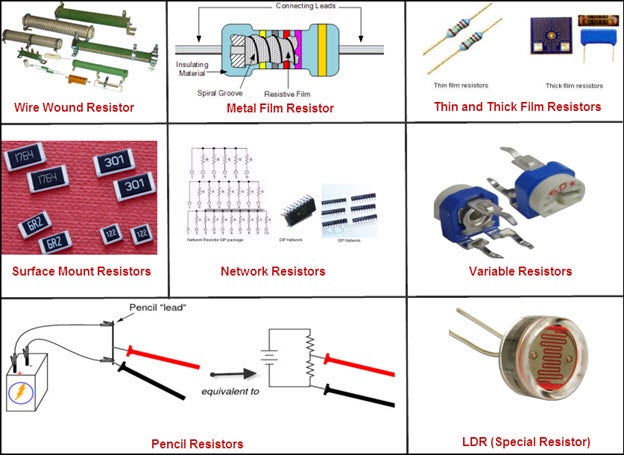 Resistors are passive components, meaning they only consume power (and can’t generate it). Resistors are usually added to circuits where they complement active components like op-amps, microcontrollers, and other integrated circuits. Commonly resistors are used to limit current, divide voltages, and pull-up I/O lines.

The electrical resistance of a resistor is measured in ohms. larger or smaller values of ohms can be matched with a prefix like kilo-, mega-, or giga-, to make large values easier to read. It’s very common to see resistors in the kilohm (kΩ) and megaohm (MΩ) range (much less common to see miliohm (mΩ) resistors). For example, a 4,700Ω resistor is equivalent to a 4.7kΩ resistor, and a 5,600,000Ω resistor can be written as 5,600kΩ or (more commonly as) 5.6MΩ.

The Different Types of Resistor

There are many thousands of different Types of Resistor and are produced in a variety of forms because their particular characteristics and accuracy suit certain areas of application, such as High Stability, High Voltage, High Current etc, or are used as general purpose resistors where their characteristics are less of a problem.

Some of the common characteristics associated with the humble resistor are; Temperature Coefficient, Voltage Coefficient, Noise, Frequency Response, Power as well as a resistors Temperature Rating, Physical Size and Reliability.

Based on the conductive properties of a resistor resistors can be classified as:

Linear Resistor: A linear resistor is the type of resistor whose resistance remains constant with increase in the potential difference or voltage applied to it. Or the Resistance or Current passed through the resistor does not changes as the applied voltage ( P.D ) changes. The V-I characteristics of such resistor is a straight line.

Non linear resistors are used in different projects. LDR is used as a sensor in various robotics an hobbyist project.

Based on Resistor’s Value

Fixed value resistors are those types of resistors whose value is fixed already while manufacturing and cannot be changed during it’s usage.

Variable Resistors or Potentiometers are those types of resistors whose Value can be changed during it’s usage. These types of resistor usually contains a shaft which can be rotated or moved by hand or a screw driver to change it’s value in between a fixed range for eg. 0 Kilo Ohms to 100 Kilo Ohms.

Potentiometers are used for volume and speed control in different projects and devices.

These types of resistor is a resistor which contains a package which contains two or more resistors inside it. It have many terminals and the resistor’s resistance can be chosen by using any two terminals among the available terminals or can also be used as an resistor array for various purposes.

These types of resistors are made by a composition of Carbon Particles which are hold together by a binding resign. The proportion of carbon particles and resign used determines the value of the resistor. At both ends of the composition a Metal Cap with a small rod of tin is attached to solder it or use it in circuits , then the whole package is enclosed in a plastic case to prevent moisture and reaction with air.

These types of resistors normally produces noise in circuit due to electron passing through one carbon particle to another , thus these types or resistors are not used in critical circuits although they are cheap.

Wire wound resistor are made by winding a metal wire around a ceramic core. The metal wire is an alloy of various metals based on the characteristics and resistance of the resistor required. These types of resistor have high stability and can also withstand high powers but are usually bulkier compared to other types of resistors.

Based on Resistor’s Function:

Precision Resistors are resistors that have very low tolerance values, so they are very precise (closely near
their nominal value).

Precision resistors have very low tolerance percentage values, making them ultraprecise to their nominal values. They will vary very little from their nominal values, so they are used in applications where high-precision is necessary in terms of resistance values.

Typical power ratings range from 1W to 20W or more. Tolerances from the stated resistance value are around 5 percent.

Thus, photoresistors are variable resistors whose resistance values change in regard to the amount of light hitting its surface.

Leaded resistors: This type of resistor has been used since the very first electronic components have been in use. Typically components were connected to terminal posts of one form or another and leads from the resistor element were needed. As time progressed, printed circuit boards were used, and the leads were inserted through holes in the boards and typically soldered on the reverse side where the tracks were to be found.

These resistor types have been used increasingly since the introduction of surface mount technology. Typically this type of resistor is manufactured using thin film technology. A full range of values can be obtained.