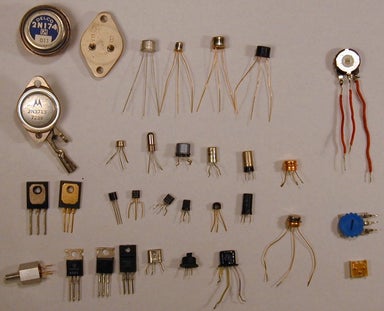 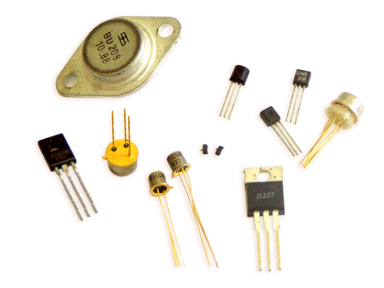 Transistors can be regarded as a type of electronic switch, as can many electronic components. Transistor is much more faster than mechanical switch.

There are two types of basic transistor out there: bi-polar junction (BJT) and metal-oxide field-effect (MOSFET), and there are actually two versions of the BJT: NPN and PNP. Most circuits tend to use NPN. There are hundreds of transistors which work at different voltages but all of them fall into these two categories. Transistors are manufactured in different shapes but they have three leads (legs). The BASE - which is the lead responsible for activating the transistor.The COLLECTOR - which is the positive lead.The EMITTER - which is the negative lead.

A transistor is really simple—and really complex. Let's start with the simple part. A transistor is a miniature electronic component that can do two different jobs. It can work either as an amplifier or a switch:

When it works as an amplifier, it takes in a tiny electric current at one end (an input current) and produces a much bigger electric current (an output current) at the other. In other words, it's a kind of current booster. That comes in really useful in things like hearing aids, one of the first things people used transistors for. A hearing aid has a tiny microphone in it that picks up sounds from the world around you and turns them into fluctuating electric currents. These are fed into a transistor that boosts them and powers a tiny loudspeaker, so you hear a much louder version of the sounds around you.

Transistors can also work as switches. A tiny electric current flowing through one part of a transistor can make a much bigger current flow through another part of it. In other words, the small current switches on the larger one. This is essentially how all computer chips work. For example, a memory chip contains hundreds of millions or even billions of transistors, each of which can be switched on or off individually. Since each transistor can be in two distinct states, it can store two different numbers, zero and one. With billions of transistors, a chip can store billions of zeros and ones, and almost as many ordinary numbers and letters (or characters, as we call them). More about this in a moment.

Operation Modes
Unlike resistors, which enforce a linear relationship between voltage and current, transistors are non-linear devices. They have four distinct modes of operation, which describe the current flowing through them. (When we talk about current flow through a transistor, we usually mean current flowing from collector to emitter of an NPN transistor. The four transistor operation modes are:

Saturation – The transistor acts like a short circuit. Current freely flows from collector to emitter.

Cut-off – The transistor acts like an open circuit. No current flows from collector to emitter.

Active – The current from collector to emitter is proportional to the current flowing into the base.

Reverse-Active – Like active mode, the current is proportional to the base current, but it flows in reverse.

One of the most fundamental applications of a transistor is using it to control the flow of power to another part of the circuit – using it as an electric switch. Driving it in either cutoff or saturation mode, the transistor can create the binary on/off effect of a switch. Transistor switches are critical circuit-building blocks; they’re used to make logic gates, which go on to create microcontrollers, microprocessors, and other integrated circuits.

Let’s look at the most fundamental transistor-switch circuit: an NPN switch. Here we use an NPN to control a high-power LED. 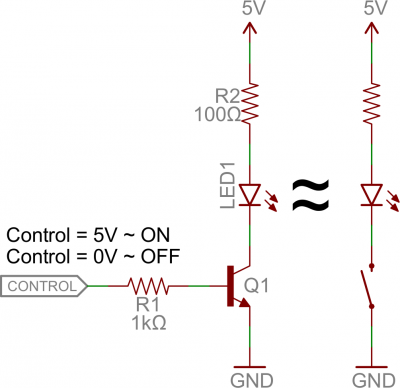 Our control input flows into the base, the output is tied to the collector, and the emitter is kept at a fixed voltage.

While a normal switch would require an actuator to be physically flipped, this switch is controlled by the voltage at the base pin. A microcontroller I/O pin, like those on an Arduino, can be programmed to go high or low to turn the LED on or off.

The circuit above is called a low-side switch, because the switch – our transistor – is on the low (ground) side of the circuit. Alternatively, we can use a PNP transistor to create a high-side switch: 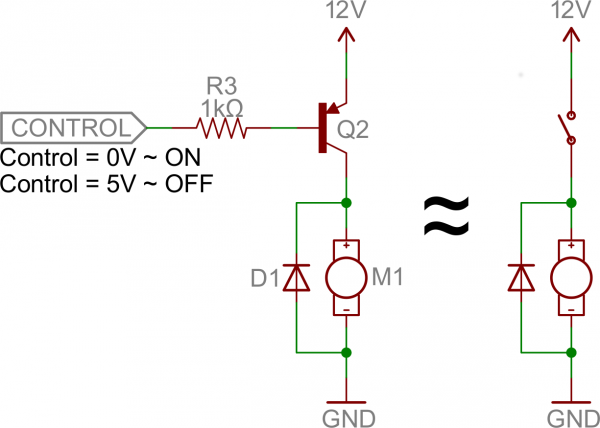 This circuit works just as well as the NPN-based switch, but there’s one huge difference: to turn the load “on” the base must be low. This can cause complications, especially if the load’s high voltage (VCC in this picture) is higher than our control input’s high voltage. For example, this circuit wouldn’t work if you were trying to use a 5V-operating Arduino to switch on a 12V motor. In that case it’d be impossible to turn the switch off because VB would always be less than VE.

You’ll notice that each of those circuits uses a series resistor between the control input and the base of the transistor. Don’t forget to add this resistor! A transistor without a resistor on the base is like an LED with no current-limiting resistor.

Recall that, in a way, a transistor is just a pair of interconnected diodes. We’re forward-biasing the base-emitter diode to turn the load on. The diode only needs 0.6V to turn on, more voltage than that means more current. Some transistors may only be rated for a maximum of 10-100mA of current to flow through them. If you supply a current over the maximum rating, the transistor might blow up.

The series resistor between our control source and the base limits current into the base. The base-emitter node can get its happy voltage drop of 0.6V, and the resistor can drop the remaining voltage. The value of the resistor, and voltage across it, will set the current.

The resistor needs to be large enough to effectively limit the current, but small enough to feed the base enough current. 1mA to 10mA will usually be enough and base resistor value may be 1k to 10k, but check your transistor’s datasheet to make sure.

Please check the datasheet for details.

The metal–oxide–semiconductor field-effect transistor (MOSFET, MOS-FET, or MOS FET) is another type of transistor used for amplifying or switching electronic signals.

The main advantage of a MOSFET over a regular transistor is that it requires very little current to turn on (less than 1mA), while delivering a much higher current to a load (10 to 50A or more).

The Metal Oxide Semiconductor Field Effect Transistor, or MOSFET for short, has an extremely high input gate resistance with the current flowing through the channel between the source and drain being controlled by the gate voltage. Because of this high input impedance and gain, MOSFETs can be easily damaged by static electricity if not carefully protected or handled.

MOSFET’s are ideal for use as electronic switches or as common-source amplifiers as their power consumption is very small. Typical applications for metal oxide semiconductor field effect transistors are in Microprocessors, Memories, Calculators and Logic CMOS Gates etc.

You can buy transistors from there: